The Health Benefits Of Ginger – Is It Really Good For You?

You’ve probably heard of ginger. The flowering plant is native to Southeastern Asia, and it is proposed to be one of the healthiest on the planet.

Despite the ever-growing use of synthetic drugs as a means of treating various ailments, ginger can often be a fantastic (and natural) alternative for people.

To that end, let’s review what ginger is, what health benefits it offers, how you might grow it in your backyard, and more.

Ginger is a flowering plant that comes from Southeastern Asia but is now available worldwide. The plant is part of the Zingiberaceae family, which mainly grows in moist soil. Turmeric is also part of the same family, which makes it a close relative to ginger. You can read about turmeric’s benefits here.

The flowering plant grows up to a meter in height and produces green-purple flowers. The plant’s root is what people use to make spices, tea, and other products with medicinal properties. You can use ginger fresh, dried, or as part of a juice.

Unlike many plants and roots, ginger has a distinct spicy taste that often takes some time to get used to. Consuming ginger as tea is said to deliver many benefits, and you can improve its taste by adding a natural sweetener, such as some honey.

Ginger is also great because it has a rich nutritional profile. For reference, ginger is an excellent source of: 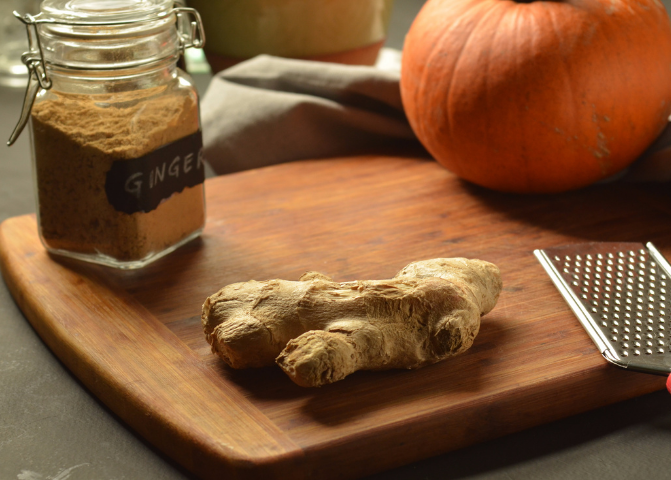 Ginger has many health benefits.

What Are The Health Benefits of Ginger?

According to research, as little as 1.5 grams of ginger consumed daily reduces the risk of nausea (1). A systematic review from 2020 looked at 109 controlled trials on ginger’s impact on GI health (2). In it, the authors concluded:

“The clinical effects of ginger have been introduced as six subsections: nausea and vomiting, gastrointestinal function, pain, inflammation, metabolic syndromes, and other symptoms. Reportedly, ginger has been effective in a majority of studies, including those that examined the alleviation of NVP, digestive function, improvement in the expression level of markers for colorectal cancer risk, and anti-inflammatory functions.”

While we need more research to conclude, findings so far have been quite promising.

One of ginger’s most popular benefits relates to its immunity-boosting properties. The ginger plant is abundant in gingerol, which is the main active compound.

Gingerol has powerful anti-inflammatory and antioxidant properties inside the body, which are proposed to strengthen our immune response, allowing us to more easily deal with viruses and infections (3, 4)

Some preliminary research suggests that consuming ginger might help relieve pain. For example, in one meta-analysis of randomized control trials, subjects who took ginger to treat osteoarthritis (OA) saw a significant drop in pain (5).

Other research on patients with OA suggests that topical application of a cream containing ginger helps lessen stiffness and knee pain (6). Speaking of arthritis, check out our guide on the benefits of fish oil for the condition.

You’ve probably heard that chewing on wild ginger might relieve a sore throat. But how valid is that claim?

We don’t have direct research that looks at this, but we have some studies that show ginger’s anti-inflammatory effects on the body. Several papers show that ginger has potent protective effects against inflammation (3, 4).

Some research suggests that ginger consumption can lead to a modest reduction in malondialdehyde, a by-product of oxidative stress (8).

Ginger also appears to improve the ratio between Apolipoprotein B and Apolipoprotein A-I, the primary proteins that make up LDL (bad) and HDL (good) cholesterol, respectively.

Together, these findings suggest that regular ginger consumption reduces the risk of cardiovascular disease. With that said, we need more research before concluding. But findings so far have been promising.

As briefly mentioned earlier, gingerol is the main active compound in ginger. Some research has taken a closer look at gingerol’s effectiveness against several types of cancer (9). For example, in one study, researchers suggest that 6-gingerol appears to be cytotoxic to various kinds of cancer cells (10).

While we certainly need more research to be sure, ginger shows promise as an alternative medicine for cancer.

A 2019 meta-analysis of 14 studies showed that ginger consumption led to weight reduction in overweight and obese individuals (11). One potential mechanism behind this effect could be that ginger seems to reduce blood insulin levels (12). The hormone plays a huge role in regulating blood sugar levels, but elevations are linked to reduced fat-burning.

Ginger might also have regulating effects on hunger and appetite, but we need more research to determine that. While a hypothesis, the idea makes sense because weight loss depends on creating and sustaining an energy deficit (13).

How to Grow Ginger in Australia

As a warm climate plant, ginger is prime for growth in Australia. Growing it in a garden is ideal, but you can also use pots if you don’t have a yard. Pots are also beneficial because they offer mobility. For example, you can move your ginger around your yard as needed.

The ideal time to plant your ginger is in early spring, once temperatures climb over 20-22 degrees celsius. It’s also beneficial to plant your ginger in a slightly shady area to prevent too much direct sunlight on your growing plants. Australia is fantastic for growing ginger, but there are plenty of scorching summer days that can burn the ginger.

Aside from good positioning, ginger also requires the correct type of soil to grow optimally. The plant appears to grow best in slightly acidic soil with a pH of between 5 and 6.5. You don’t have to test your soil if you don’t want to, but know that it makes a difference.

The soil should also be loose enough to allow the ginger root to grow and spread freely. Firm soil might prevent the ginger plant from developing well. Soil that is too hard can also prevent water from draining, which also isn’t ideal. Ginger needs water, but it doesn’t need too much of it at all times.

Picking the right ginger roots to plant is also essential. If possible, get some organic ginger because most store-bought options get sprayed with different chemicals to increase shelf life. Each piece of root you plant should be moderately big, and it should look fresh. Once you’ve prepared your ginger roots, spread them 20 to 25 centimeters apart and push them two to five centimeters beneath the soil’s surface.

As far as watering goes, ginger is excellent because it doesn’t take much to grow. As a rule of thumb, you should stick a finger into the soil to determine if the plant needs watering. If the soil is somewhat moist, leave it as is. In contrast, if the ground feels dry to the touch, add some water.

You should start collecting your ginger once most of its leaves have turned yellow, which indicates that enough time has passed for it to mature fully. 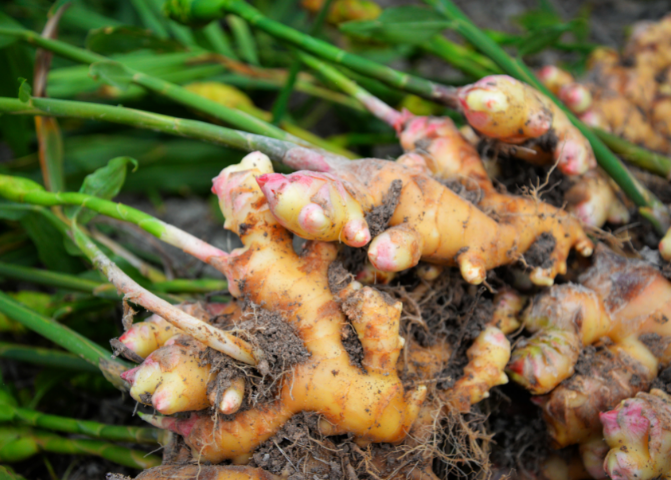 The ideal time to plant your ginger is in early spring.

How Long Does Ginger Last?

A question that relates to growing your ginger is how long it would last. For example, if you put effort into growing ginger, how long would it be useful?

Fresh ginger and whole ginger roots have a shelf life of around one week. You can extend that to one month by storing them in your fridge. Freezing your ginger in air-sealed bags can increase its lifespan to about three months.

The easiest way to determine if your ginger is going bad is by its firmness. Fresh ginger is firm to the touch and has a fresh look. In contrast, bad ginger has a grey-ish color and is softer to the touch.

How Much Ginger Should You Take Daily?

Most doctors agree on an upper limit of two to four grams of ginger daily. Pregnant and nursing women should avoid having more than a gram of ginger per day.

You can be somewhat liberal with your ginger tea consumption because less material is required to produce it. Meaning, you can have multiple cups every day without going over the recommended upper limit.

Ginger supplements are not recommended for children under the age of two.

Is Ginger Low in FODMAPs?

FODMAP, short for fermentable oligo-, di-, monosaccharides, and polyols, refers to types of carbs found in foods like beans (14). These carbohydrates have short chains and are more difficult to digest, which is why research links them to GI issues, such as (15):

Following a diet low in FODMAPs can reduce the risk of the issues mentioned above. Still, it’s important to note that most of the research in the area has been conducted on folks with irritable bowel syndrome (IBS).

But is ginger low in FODMAPs? Apparently, yes. Plus, even if the plant did contain some FODMAPs, we can only consume it in small amounts that couldn’t possibly lead to adverse effects.